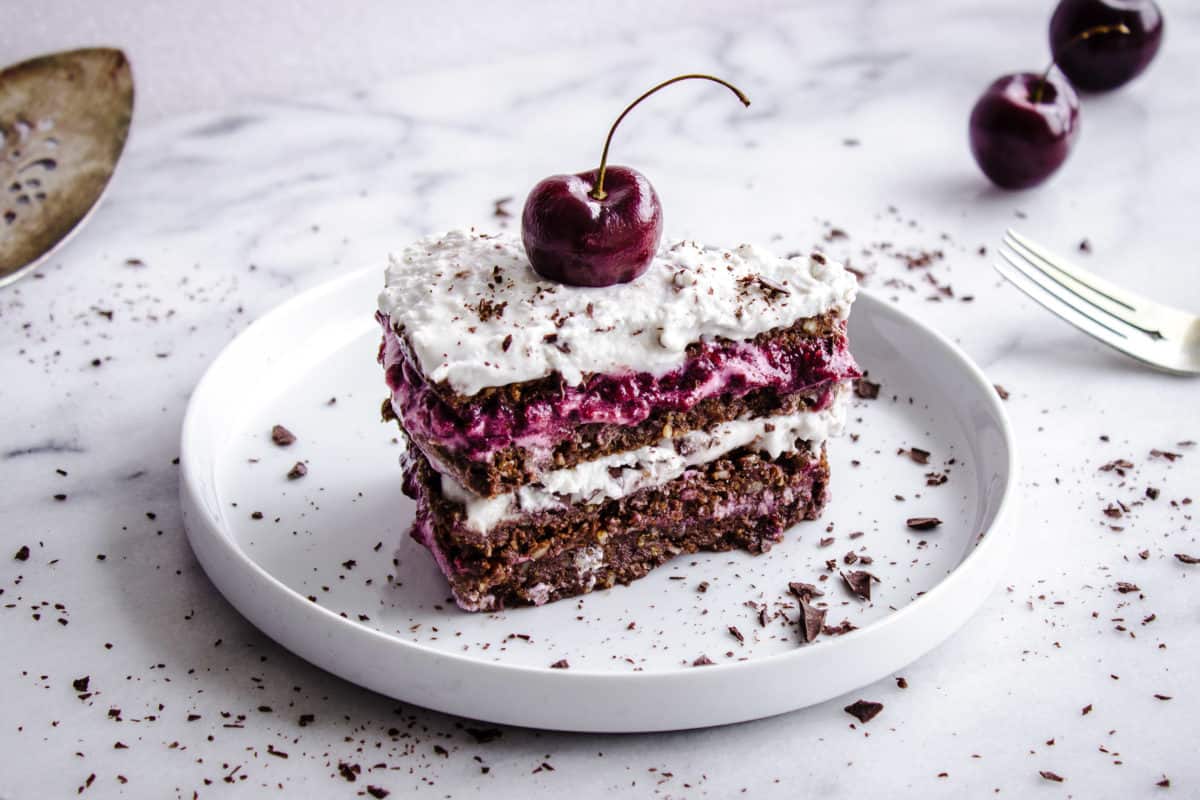 The perfect indulgent but healthy dessert: this No-bake Vegan Black Forest Cake is surprisingly easy to make but looks and tastes incredible!

I first shared the recipe for this No-Bake Vegan Black Forest Cake exclusively with my newsletter subscribers several months ago. It was a recipe I was really pleased with (I'm obsessed with anything Black Forest flavoured) and I had some great feedback, so decided I couldn't just leave it to languish in peoples' inboxes.

A few weeks later, I posted it on Instagram. And the post EXPLODED. I've never had so much interest in one post before, and it was even featured by Best of Vegan. Suffice to say, it's a recipe you guys seem to love, and that makes me so happy because I love it too!

This vegan Black Forest cake quickly became my most popular Instagram post ever, and much to my surprise gained me quite a few new followers. However, I still felt that the recipe deserved a permanent home, so am finally sharing it with you here on the blog!

If you love traditional Black Forest Gateau, why not give this no-bake version a try? It's a little healthier and more protein-rich but is still utterly delicious. The flavour combination of chocolate, cherry and cream is one of my all-time favourites, and I hope you'll feel the same way after trying it. 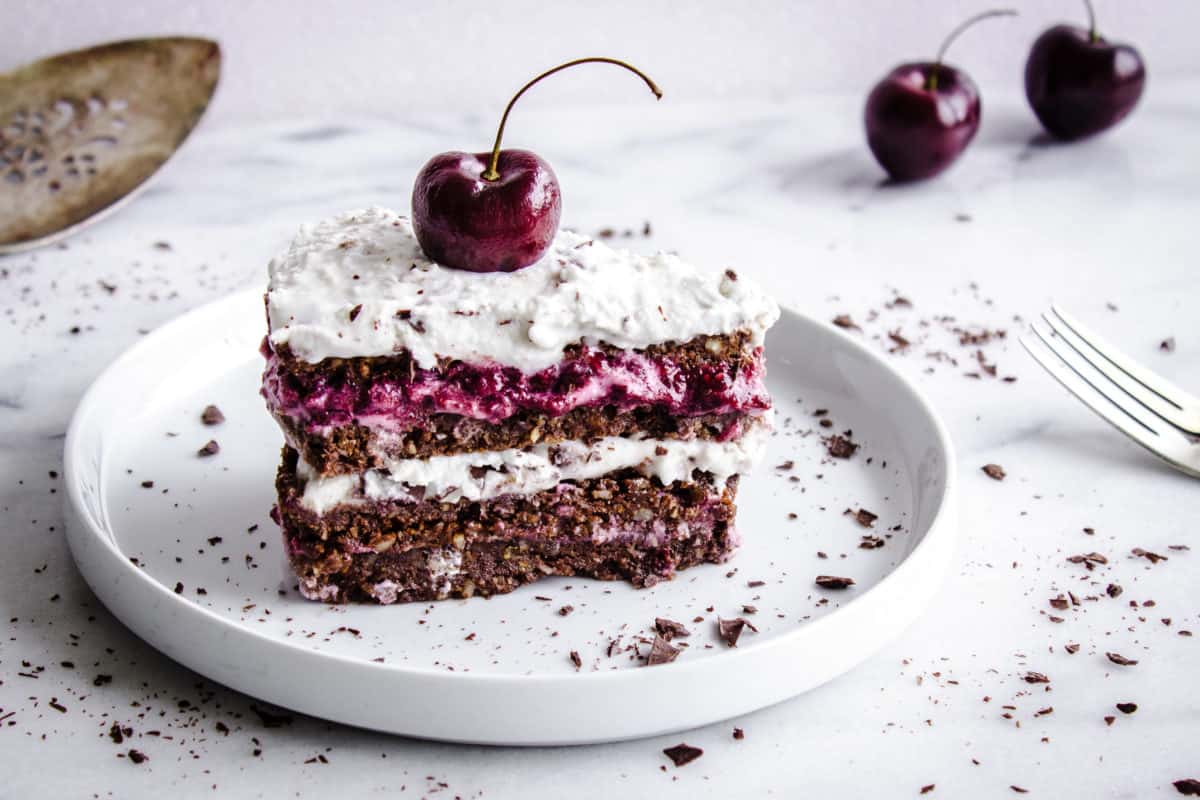 This recipe combines the traditional Black Forest flavours of cherry, chocolate and cream to create a delicious dessert, but there are differences from the original.

The most obvious being that this is, essentially, a raw cake (except for the lightly cooked cherry filling). Whilst it is delicious (really, I'm not just saying that!), it naturally tastes a bit different to a baked cake because of this. So don't expect a fluffy sponge!

Raw cakes are also very nutrient-dense and high in protein so you'll likely find that this cake is very filling. Personally, I love desserts like this because I don't ever get a sugar crash after eating them. You may want to make your portions slightly smaller for this reason though. You'll probably find you need less to feel satisfied!

(See my notes below the recipe for tips and substitutions.)

1) Does this no bake cake taste the same as a regular Black Forest Cake?

Not exactly! Because the base is made from nuts, dates and cacao, it tastes more like a really chocolatey energy ball or raw brownie. Lots of nutritious ingredients but with a definite indulgent feel.

2) Is it important to scatter some fresh cherry pieces over the filling?

Yes! The cake base itself is quite solid, so if you don't do this, as soon as you cut into it the cake base will squash the cherry/cream filling down and it'll splurge out the side! The fresh cherry pieces add a bit of structure to the cake to stop this happening.

3) Where does Black Forest Cake come from?

Black Forest Gateau takes its name from the sour cherries of the Black Forest in Germany. A kirsch alcohol made from these cherries was used in a chocolate layer cake decorated with cherries and whipped cream, and was popularized in Germany and Switzerland. For a more in depth explanation - check out this article.

To make the cherry filling

To make the cake

To make the cream

- If making the cherry filling is too much of a time commitment, you can substitute your favourite cherry jam instead, or just use fresh cherries.   - You can also substitute berries in this recipe if you don't have any cherries, just add a bit more maple syrup to ensure the berries are sweet enough.  - For the cake base, feel free to use a mix of sunflower seeds and walnuts if you want to make it more cost-effective. 2 cups walnuts and 1 cup sunflower seeds works well as a substitute - I wouldn't use any more sunflower seeds than this as they can have a fairly pronounced taste. If you do this, you might need to add a little water to make the mixture stick together.   - If you're struggling with making the cream filling, just follow my step-by-step guide on how to make coconut whipped cream here. 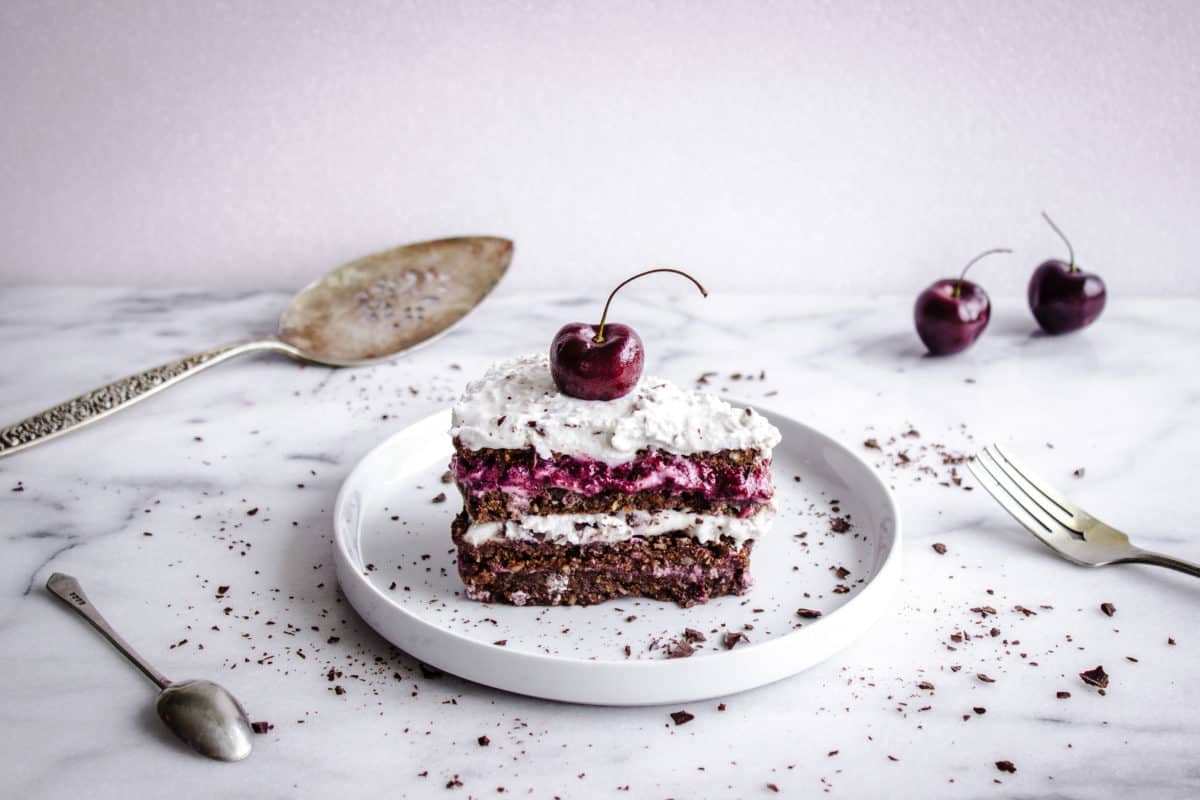 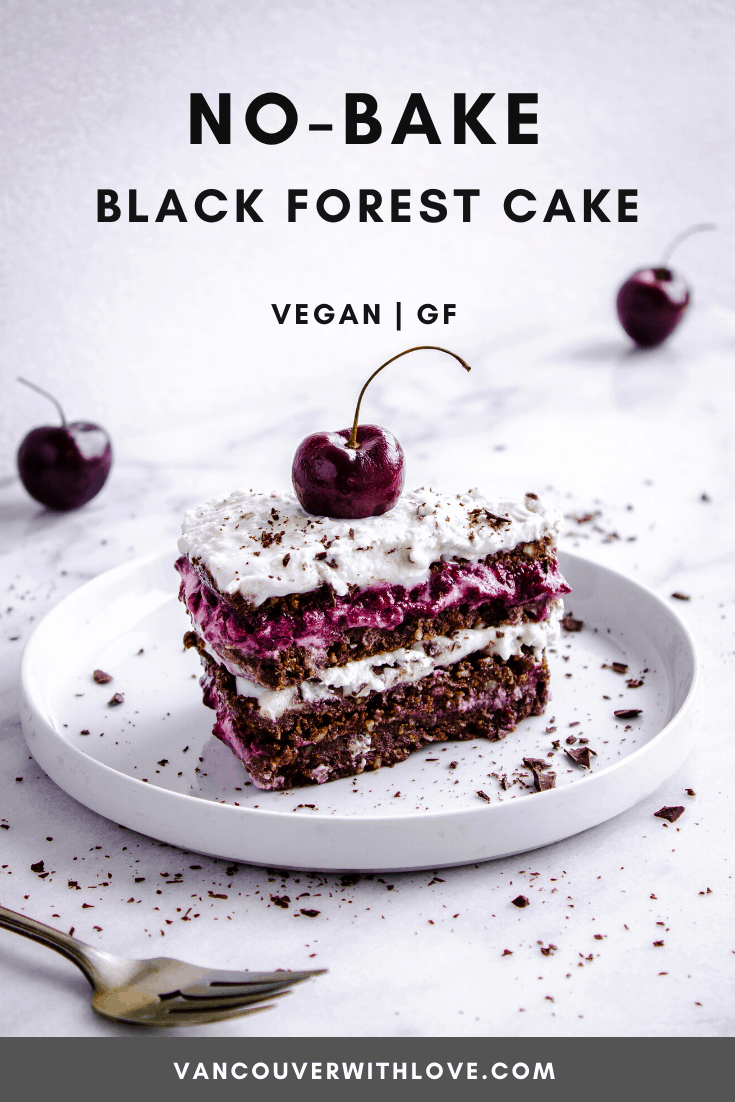