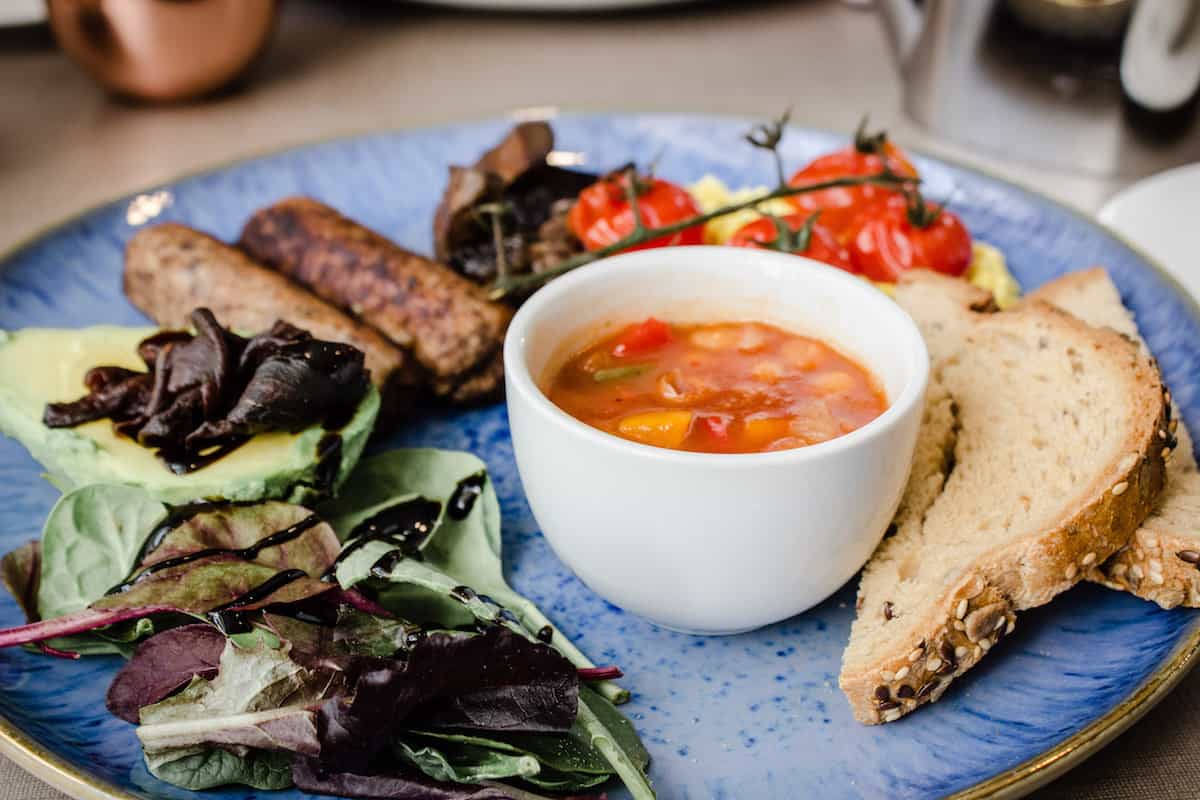 This is a sponsored post. I was recently invited to stay at La Suite West Hotel in London. My stay, including breakfast and afternoon tea was kindly hosted by them. This review is honest in its content however and all thoughts and opinions expressed are my own.
———

I love hotels. Always have. Ever since I was little I’ve loved the experience of staying somewhere glamorous, where I’m looked after and fed. To me, it’s bliss. In recent years though, finding a hotel that can cater well to my now vegan diet has proved challenging. I was so excited therefore when I learned of La Suite West. A boutique hotel in London’s Bayswater which prides itself on being totally animal-free, I knew I had to stay. 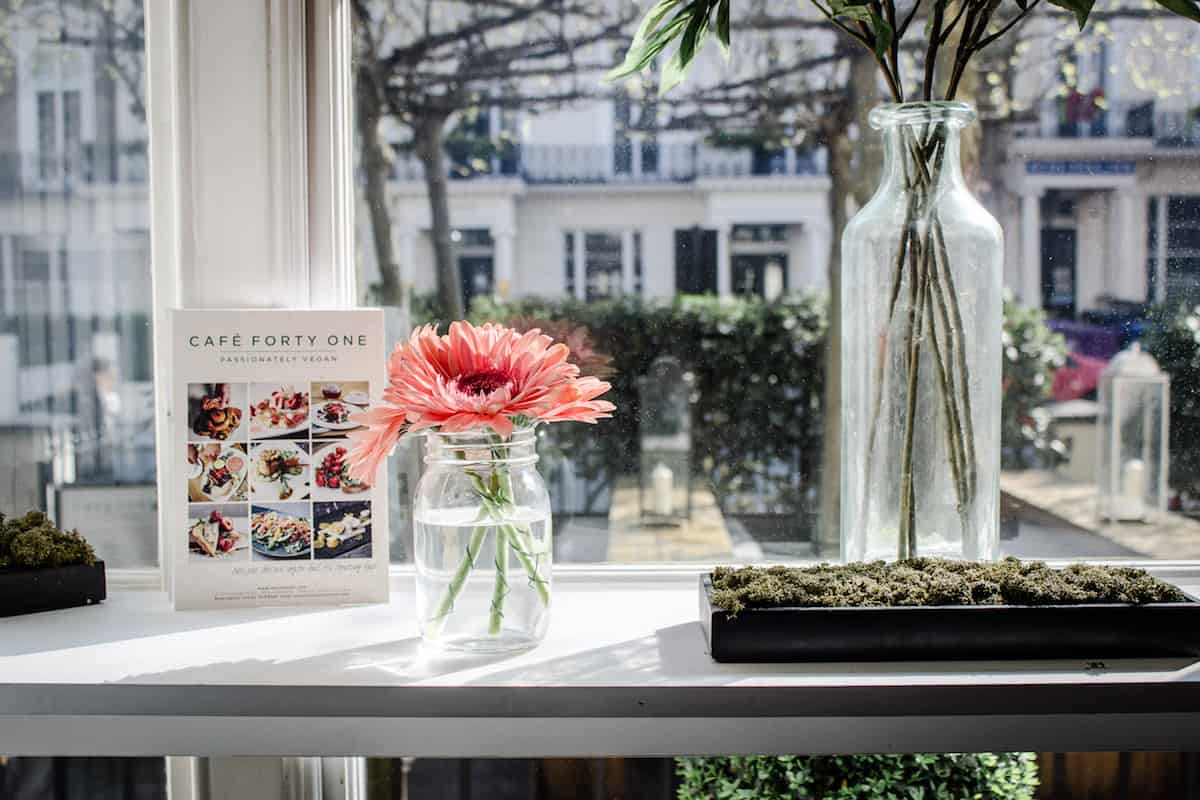 Located just north of Kensington Gardens, La Suite West is tucked into a quieter road just off busy Queensway. An unassuming building with a patio outside, you follow a small entrance into a modern, cooly decorated reception area. Staff were on hand to welcome us and confirm our details, but the check-in process was low-key and relaxed. Walking through the hotel to our room the corridors were sleek and dark (in-keeping with the design theme), which may be something to be aware of if visibility is a factor for you. 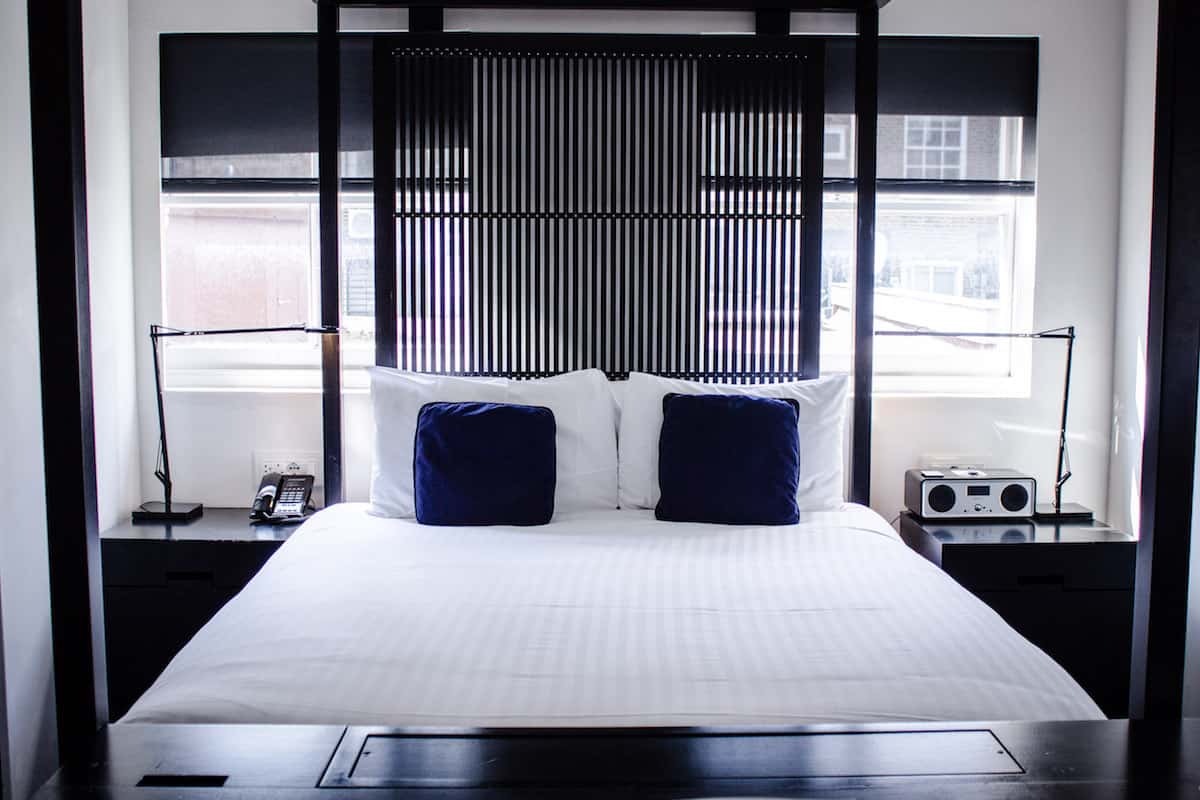 As a blogger reviewing the hotel, I’d kindly been offered a one-bedroom suite for my stay. Whilst initially very excited, I was a little disappointed upon entering the space. While the small entryway with tea-making station was sleekly designed, and opened onto a black and blue room with a queen-sized bed (which was very comfortable) and shower room, unfortunately the bedroom itself showed definite signs of wear. There were carpet and textile stains, marks on the wall and scratches on the furniture. (See my note at the end of this post regarding the hotel’s planned imminent refurbishment.) The bathroom however – although rather small to manoeuvre in – was fully kitted out in marble which was a great touch and added a sense of elegance to the space.

As a welcome touch, the hotel had very sweetly left a platter of tiny treats for us. They were delicious, and included vegan meringues, berries and biscuits. It was really lovely knowing that for once in a hotel, everything was vegan-friendly! 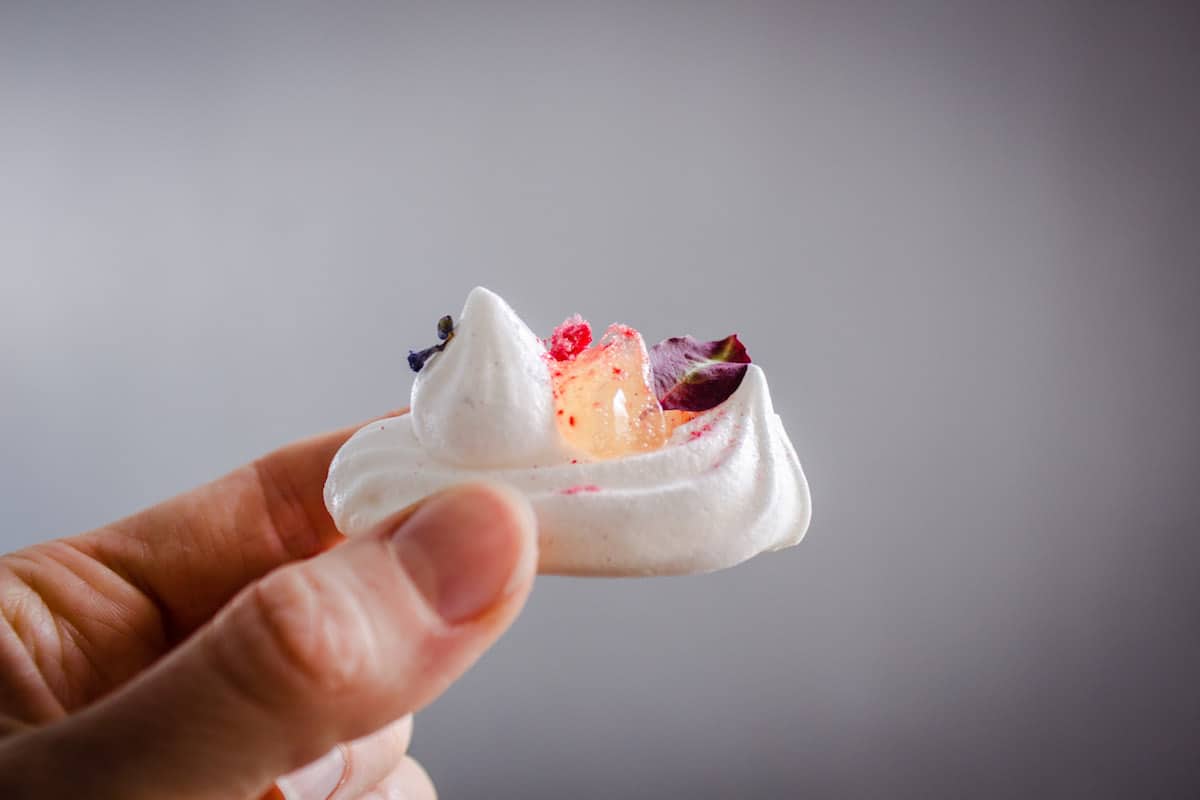 Considering its central London location, there was little street noise and the space felt peaceful for a busy hotel. However, during both nights of our stay we were repeatedly bothered by noise from the room upstairs. Upon calling down to Reception we were told they would ask our fellow guests to be a little quieter, but this proved ineffective and we continued to hear noise (akin to heavy footsteps) both nights, despite contacting Reception again. This could have been down to luck, and I appreciate that the hotel is only able to control the noise level of its guests to an extent. It did however underline the fact that – perhaps being an old building – the floors/ceilings between rooms are not thick and sound does travel, something light sleepers may wish to note. 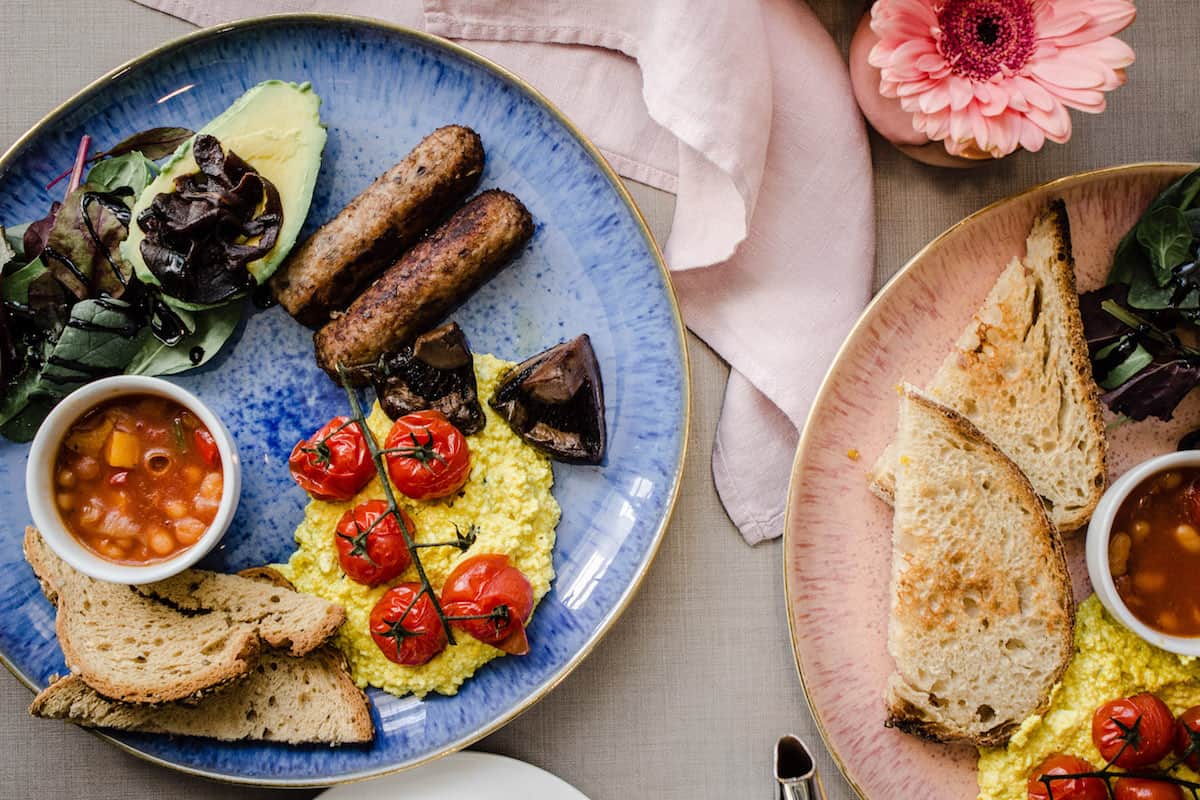 After our night’s sleep, we wandered down to La Suite West’s restaurant to enjoy a vegan full English breakfast. To our surprise, we were also offered the full run of the hotel’s continental vegan breakfast buffet! Perhaps I’m too used to struggling to find plant-based options but for me, being able to eat anything from a breakfast buffet – including croissants and pastries – was absolute heaven. All the pastries were delicious, and the hotel’s cashew-based cheese spread with fresh bread was to die for.

The full English came with tofu scramble, sausages, tomatoes, mushrooms, avocado, beans and toast and was a hearty meal. It was lovely having the option of topping it up with items from the continental buffet, but it really was a meal on its own. The petite restaurant was extremely quiet with only a few other guests around. Although service was a little slow it was pleasant being able to enjoy breakfast quietly in our own time. 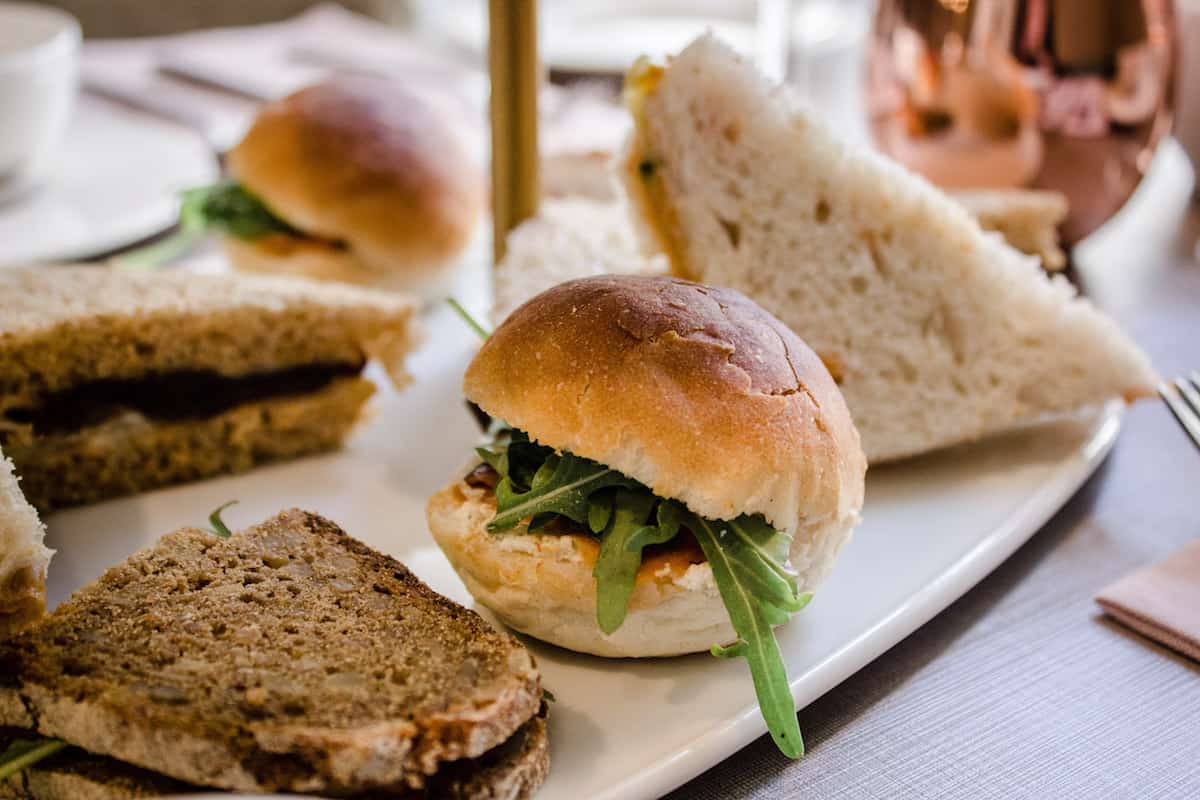 Later that afternoon we enjoyed a delicious vegan Afternoon Tea in the hotel’s restaurant. This tea truly was the highlight of our stay. (Although it maybe be worth noting that unlike other Afternoon Tea experiences in more traditional hotels, this one doesn’t come with any fuss or ceremony. Our server brought our tea over, explained what we were eating and then left us to enjoy.)

It began with glasses of non-alcoholic fizz and our choice of loose leaf tea. Our three-tiered cake stand contained delicious finger sandwiches, with imaginative flavours and takes on non-vegan classics, such as a BLT made with aubergine instead of bacon. I was impressed by the variety of delicious breads used, such as sourdough, rye and brioche. 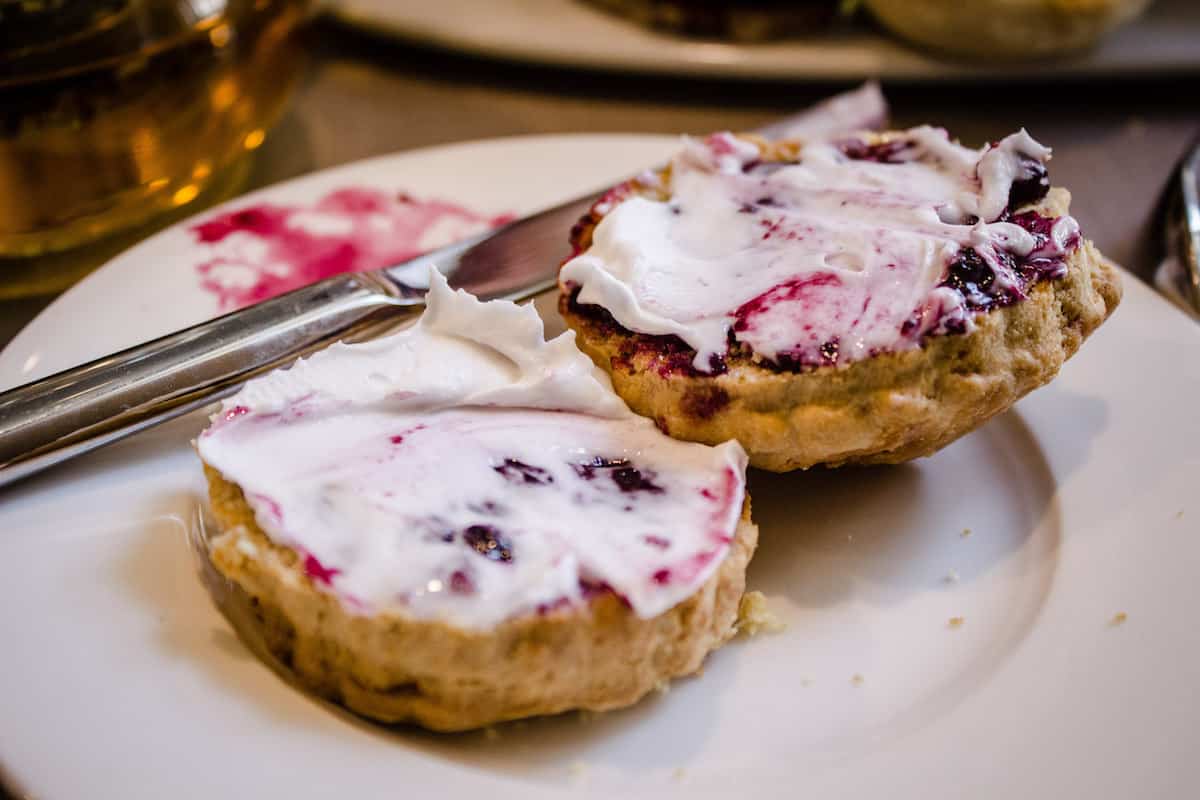 It was the scones however that were the true highlight of this Afternoon Tea. Light yet moist, they were served with berry compote and the lightest coconut cream I’ve ever tasted. Considering that scones are traditionally rather heavy, the fact we managed to demolish all of ours is testament to their excellence!

The scones were followed by a final tier of cakes and sweet treats. These included a mini cinnamon pastry, chocolate cherry cakes and a pear jelly tart. We topped the Afternoon Tea off with a pot of flowering jasmine tea which was mesmerising to watch as it unfolded, and added a lovely finishing touch to our stay. 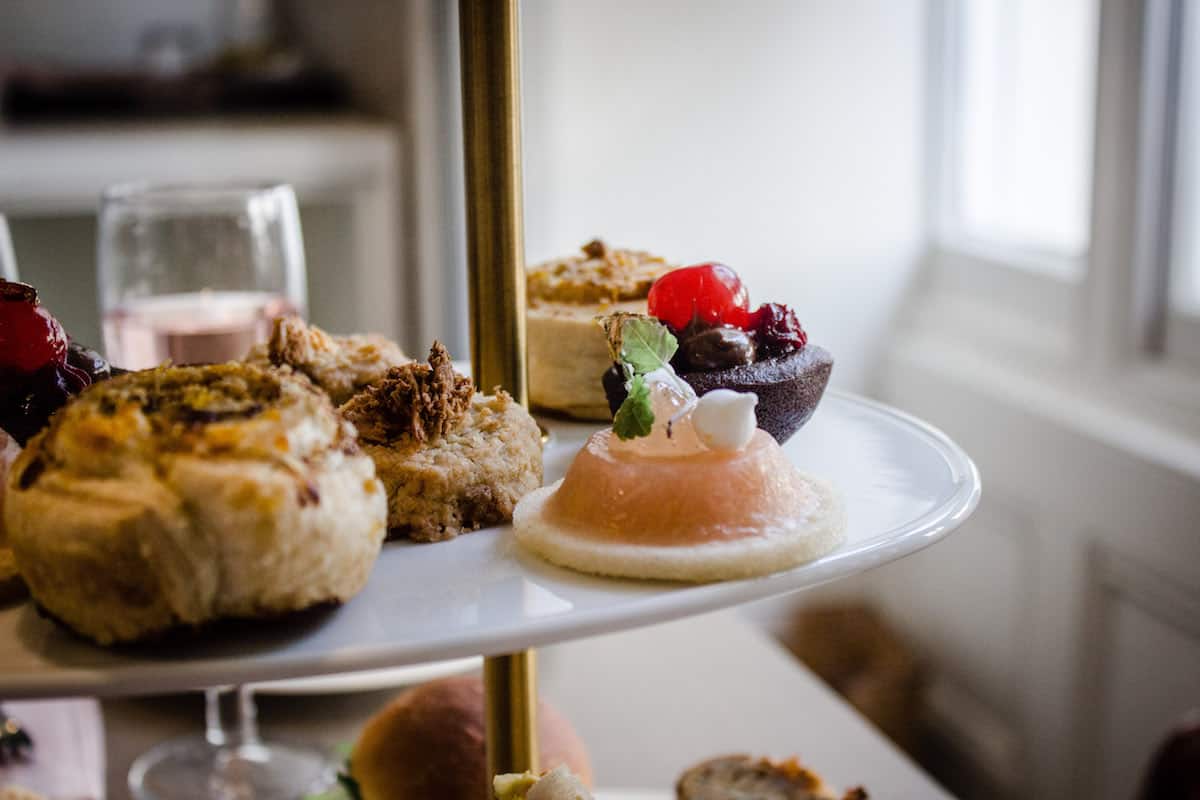 For vegan travellers, La Suite West is undeniably a great option when staying in London. Indeed, it’s one of only a handful of fully vegan accommodations in the capital. Most impressive is the restaurant’s imaginative food offerings. Even in the most plush London hotels, you’d struggle to find another Afternoon Tea making use of cultured nut cheeses and carrot-based smoked salmon. The food is innovative and a breath of fresh air for anyone tired of having limited vegan options when travelling. It’s the only hotel I’ve stayed in where the entire breakfast buffet was vegan – not to be taken lightly!

Where I found the hotel struggled however was in its decor, particularly in the bedrooms. While they must have appeared sleek and minimalist when the hotel first opened, our room was certainly showing signs of wear and could have used a general refresh (please see the hotel’s update below regarding planned refurbishment). The corridors, while intentionally dark, could make navigation difficult and made the whole space seem smaller and more compact. Noise from fellow guests was also an issue, as was the hotel’s inability to minimize it. 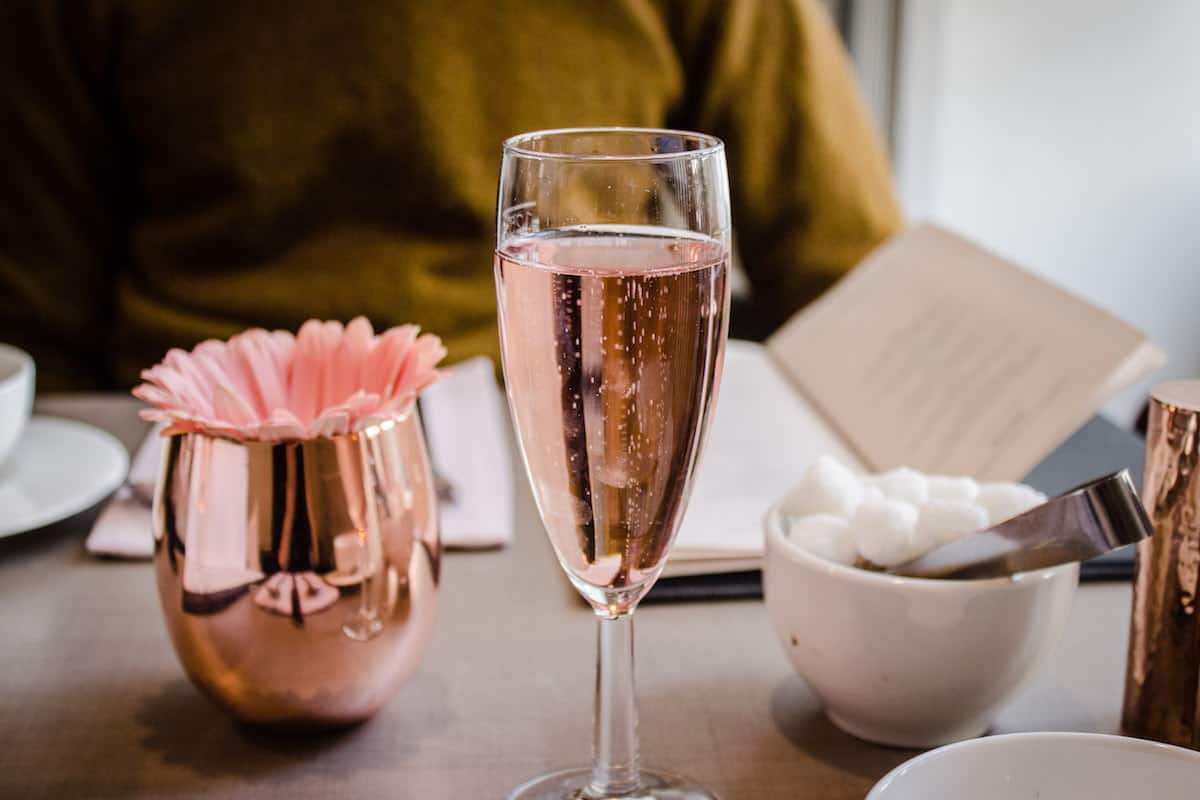 In conclusion, I would recommend La Suite West to plant-based travellers looking for a fuss-free stay in a hotel conveniently located for West London’s attractions. While the hotel doesn’t scream luxury, its trump card for vegans is undoubtably its delectable food. If you’re after a comfortable bed and a delicious plant-based meal food in relaxed surroundings, this might just be for you. 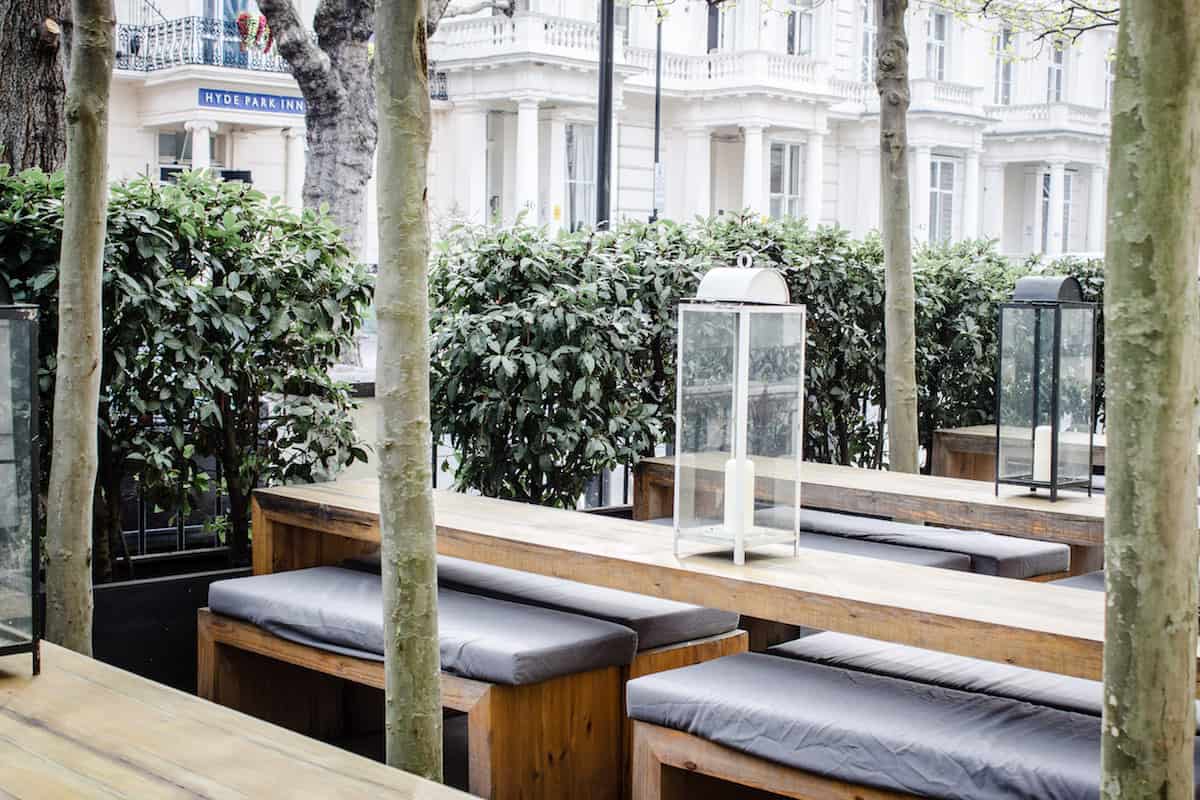 Since my recent stay, La Suite West have informed me that they do indeed have plans to upgrade and refurbish both the rooms and carpets throughout the hotel. These refurbishments are planned imminently (beginning with new carpets) and should address the decor issues I reference above. 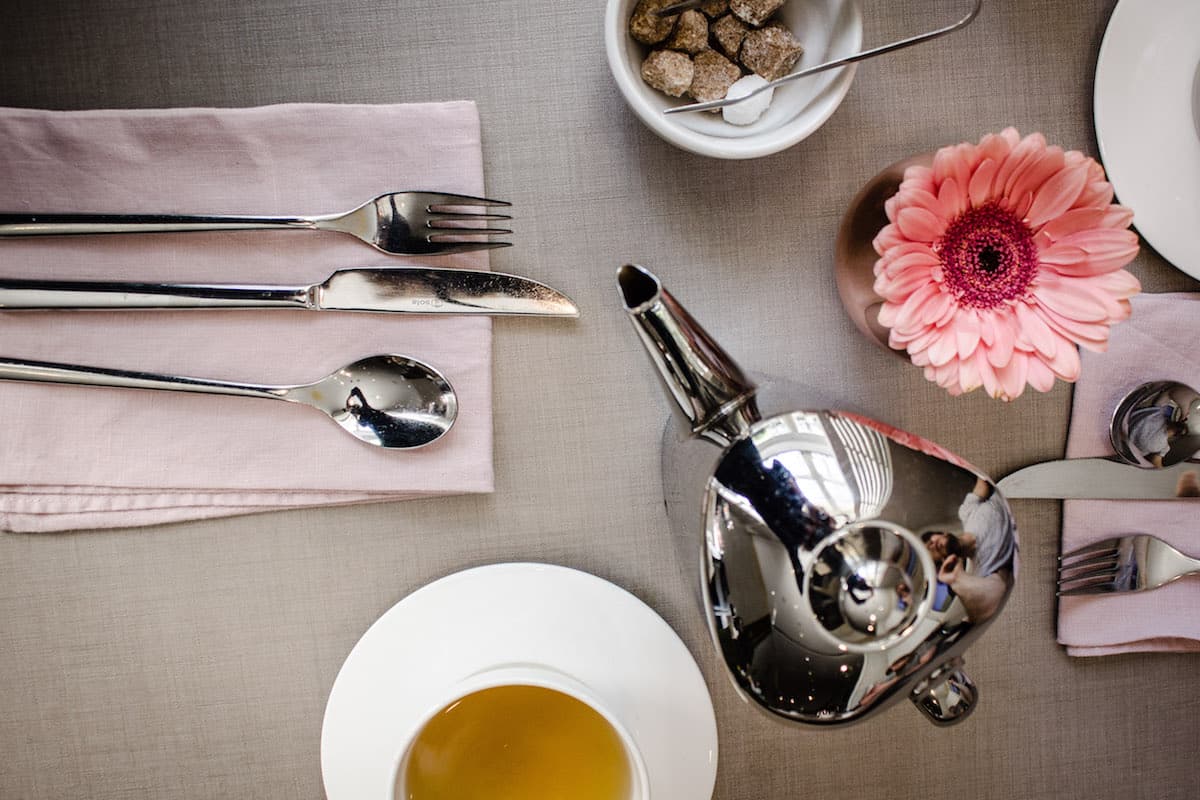 If you’ve enjoyed this article, you might be interested in my other reviews of vegan-friendly hotels and experiences, such as Egerton House’s Vegan Afternoon Tea and Ham Yard Hotel’s Vegan Menu. 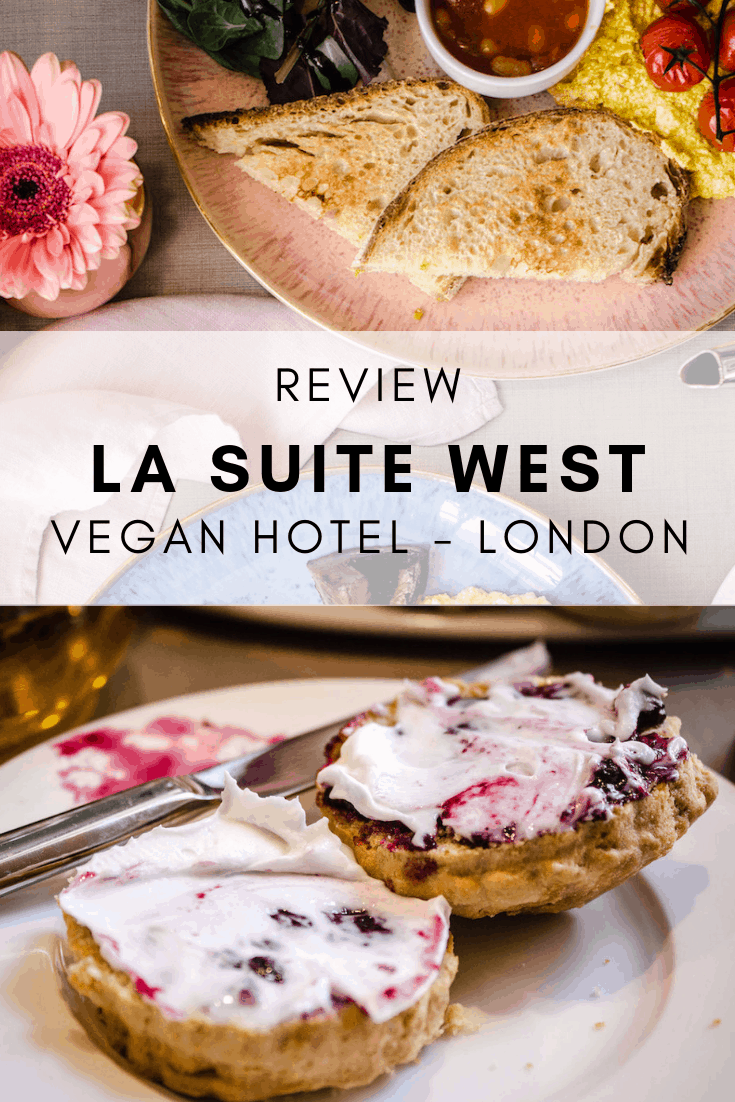